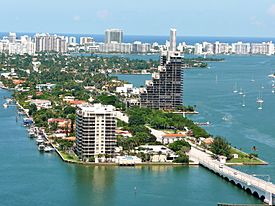 The Venetian Islands project was proposed to be much larger than what exists today. Another causeway was to be built, called "The Drive of the Campanili." The causeway would connect Hibiscus Island (south of the Venetian Islands) with Di Lido Island. The road would then continue north right up the center of Biscayne Bay, with five new islands created along its path. The roadway would then veer slightly to the northeast, where it would end at Indian Creek Village. An additional four islands would be built along two east-west roads that would connect with the causeway. One of these roads was along the current route of the Julia Tuttle Causeway and the other along the current route of the 79th Street Causeway.

The original bridge (called the Collins Bridge) was built by farmer and developer John S. Collins with financial assistance from automotive parts and racing pioneer Carl G. Fisher. At the time it was completed, it was the longest wooden bridge in the world. The 2½ mile wooden toll bridge opened on June 12, 1913, providing a critical link to the newly established city of Miami Beach, formerly accessible only by a ferry service.

While none of these islands were built, the foundation pillings for one of them can still be seen in Central Biscayne Bay between Di Lido Island and the Julia Tuttle Causeway. The island was to be called Isola di Lolando. The demise of the island construction was due to a combination of the aftermath of the 1926 Miami Hurricane and the end of the Florida land boom of the 1920s. The Shoreland Company went bankrupt in 1927 due to objections of "further mutilation of the waterway".

The original wooden causeway was replaced in 1925 by a series of arch drawbridges and renamed the Venetian Causeway. Today, the causeway is a popular stretch for people to jog, ride bikes, walk dogs and stroll. The islands offer residents a suburb feel that is located between (and within minutes of) Miami Beach's South Beach and Miami's new Adrienne Arsht Center for the Performing Arts.

Biscayne Island is a neighborhood in the City of Miami, Florida, United States. It is also the westernmost of the Venetian Islands, a chain of artificial islands in Biscayne Bay. During the 1930s, the island was used as an airport known as Viking Airport, with a hangar, 2,600' sod runway and seaplane ramps; the airport was closed by 1937 and residential development began in the 1940s. The island is now home to apartment buildings, residential neighborhoods, and a toll plaza portion of the Venetian Causeway.

San Marco Island is a neighborhood in the City of Miami, Florida, United States. It is the 2nd westernmost of the Venetian Islands, a chain of artificial islands in Biscayne Bay. It is between Biscayne Island and San Marino Island. It contains upscale houses and the Venetian Causeway.

All content from Kiddle encyclopedia articles (including the article images and facts) can be freely used under Attribution-ShareAlike license, unless stated otherwise. Cite this article:
Venetian Islands, Florida Facts for Kids. Kiddle Encyclopedia.