Adrienne Arsht Center for the Performing Arts facts for kids

The center was partly built on the site of a former Sears department store; an Art Deco building constructed in 1929, pre-dating the Art Deco hotels on Ocean Drive. It was added to the United States National Register of Historic Places in 1997 as Sears, Roebuck and Company Department Store. However, by 2001, the only surviving part of the original structure was the seven-story tower designed by Sears as its store's grand entrance. The department store space itself had been demolished and developers decided to preserve the tower and incorporate it into the new performing arts center. It has been adaptively restored as a bookstore-café called the Café at Books & Books. 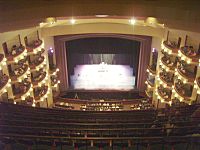 Interior of the opera house

The Center opened as the Carnival Center on October 5, 2006, with performers, politicians and movie stars attending, including Gloria Estefan, Jeb Bush, Andy García and Bernadette Peters.

In December 2008, M. John Richard joined the center as president and CEO after more than 20 years at the New Jersey Performing Arts Center (NJPAC).

Founded in 2011, the Town Square Neighborhood Development Corporation (“TSNDC”) was planned to oversee the development of the Arsht Center district. TSNDC's volunteer board: Armando Codina, chairman of Codina Partners, as chair; Manny Diaz, former City of Miami mayor, as vice chair; Michael Eidson, chairman of the Performing Arts Center Trust Board of Directors and partner of the South Florida law firm Colson Hicks Eidson, as treasurer; and Parker Thomson, founding chair of the Performing Arts Center Trust Board of Directors, as secretary. In 2019, Johann Zietsman succeeded John Richard as president and CEO after ten years in the same role at Arts Commons in Calgary.

The center was designed by the, Cesar Pelli and occupies two 570,000 square feet (53,000 m2) sites straddling Biscayne Boulevard connected by a pedestrian bridge.

Acoustics were designed by Russell Johnson of Artec Consultants company. He also worked on the Meyerson Symphony Center in Dallas.

The $470 million Adrienne Arsht Center for the Performing Arts, part of a gradually progressing redevelopment project in downtown Miami, has spurred more than $1 billion in economic impact in the neighborhood.

There are three main venues all of which can be rented for event space by the public:

In addition, there are two smaller multi-purpose venues: 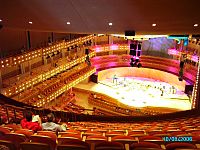 Interior of the concert hall

Educational programs, many of which are planned with Miami-Dade Public Schools, Miami-Dade County Department of Cultural Affairs, the resident companies, and community-based organizations, offer unique opportunities for young people and adults to learn about and enjoy the performing arts both in the center and out in their communities. Examples include Ailey Camp, a six-week full scholarship summer camp which debuted in 2009; and the Learning Through the Arts program, which provides live music, theater and dance components via the public school system's Passport to Culture initiative. Rock Odyssey is the flagship of the Learning Through the Arts program. It brings 25,000 fifth graders to the Center every year to enjoy a live rock-and-roll musical based on Homer's Odyssey - all free of charge to students and schools.

Programmatic series include Jazz Roots, the Knight Masterworks Season - Ziff Classical Music Series and Ziff Dance Series, Theater Up Close, Live At Knight, Flamenco Festival, Miami Light Projects Here and Now Festival, and City Theatre's Yearly Short Play Festival. The center hosts approximately 400 performances and events each year which attract an average of 450,000 people to Miami's urban core. More than 85% of the performances at the center are presented by the center.

The center also offers many free community-based performances and programs designed to make the performing arts as accessible to as wide an audience as possible. These include the free Family Fest series and Free Gospel Sundays.

The center was the site of the first Democratic primary debate of the 2020 presidential campaign, held on June 26–27, 2019, and was due to host the second of three general election debates in October 2020, but this did not go ahead. President Donald Trump had contracted coronavirus in the week before the debate and was recovering from it; for reasons of safety, the Commission on Presidential Debates proposed a virtual debate instead but Trump refused to participate. Instead, NBC News held a town-hall style event with President Trump alone, moderated by Savannah Guthrie, within the outdoor portico of the neighbouring Pérez Art Museum; the Democratic nominee, former Vice-President Joe Biden, participated in a simultaneous town-hall debate with George Stephanopoulos for ABC News at the National Constitution Center in Philadelphia, Pennsylvania.

The 2018-2019 Broadway in Miami series includes Hello Dolly, Irving Berlin's White Christmas, Les Misérables, Waitress, School of Rock: The Musical, Come From Away, and The Lion King. Subscribers from the 2018/19 season will have first access to Hamilton.

2017-2018 shows included On Your Feet!: The Story of Emilio and Gloria Estefan, The Bodyguard, Finding Neverland, The Color Purple, Chicago, and The Book of Mormon.

All content from Kiddle encyclopedia articles (including the article images and facts) can be freely used under Attribution-ShareAlike license, unless stated otherwise. Cite this article:
Adrienne Arsht Center for the Performing Arts Facts for Kids. Kiddle Encyclopedia.