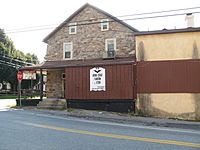 The area near Vera Cruz was originally inhabited by the Lenape. Historically, Vera Cruz was the location of one of the earliest jasper mines on the continent. The jasper mines date to 8000 BC. At the height of the Delaware Indians jasper mining activities, more than 100 small jasper pits were operated in the area of Vera Cruz, primarily in what is now Jasper Park. The quarries were eventually abandoned in the 1680s.

The purpose of these Jasper mines was to support tool production for the Lenape in the area, including arrowheads and other small tools needed for hunting and battle. The Jasper from Jasper Park has been found as far away as New England, supporting claims that the area played a key role in supporting Jasper production and trade. The Jasper Park jasper pits are part of a key 35-mile long stretch of 9 pits in the area, which stretch from the Delaware River to Fleetwood, Pennsylvania. These pits are evidence of some of the oldest-known mining operations in the New World. Today, the Jasper Pits in Jasper Park are a local attraction, which support small hiking and biking trails, which allow visitors to find examples of jasper in the pits. Removal of jasper from Jasper park is a crime.

The naming of Vera Cruz

Prior to 1851, Vera Cruz was an unnamed village at a prominent crossroad, located in what was then Milford Township, Pennsylvania. While a group of regular loungers were sitting at what was previously Alexander Weaver's store, their eyes turned to a newspaper with the title of "Revolt in Vera Cruz (Mexico): 12 Killed, 20 Injured," which led to their conversation turning to the topic of Mexico. After a sound of angry voices outside, the loungers rushed outside to see the commotion and saw two citizens engaging in a fight. Alexander Weaver jokingly remarked, "Now we have a name for our village. Why not call it Vera Cruz?" Ever since that incident, the name Vera Cruz has remained.

All content from Kiddle encyclopedia articles (including the article images and facts) can be freely used under Attribution-ShareAlike license, unless stated otherwise. Cite this article:
Vera Cruz, Pennsylvania Facts for Kids. Kiddle Encyclopedia.