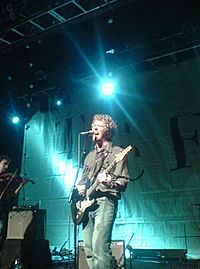 Vicar Street is a concert, performing arts centre and events venue in Dublin, Ireland. Located on Thomas Street, Dublin 8, Vicar Street has capacity for 1,050 people for seated performances and 1,500 people for standing gigs. The venue is owned by Harry Crosbie and operated by Peter Aiken. Since opening in 1998, the venue has become a popular setting for a wide range of acts including stand-up comedy, drama performances and a variety of concerts. The first artist to play on the Vicar Street Stage was local singer/songwriter Shay Cotter. Major international recording artists have performed in Vicar Street, such as Bob Dylan in 2000, Neil Young in 2003, Adele in 2008, Paul Simon and Ed Sheeran in 2011, and Lana Del Rey in 2013.

Because of its intimate size, the venue is one looked on with warmth by fans and acts alike.

The longest-running show to take place in Vicar Street was Tommy Tiernan's Loose show with a string of 166 performances.

Vicar Street hosts the Choice Music Prize ceremony in February/March each year. Occasionally the venue is used to accommodate higher attendances than expected at smaller venues. In 2008, Canadian indie rock band Wolf Parade's November show which had been scheduled for Andrew's Lane Theatre was moved to Vicar Street.

Bob Dylan performed at the venue in 2000 for his first, and as yet, only gig at the venue.

Gary Numan played his first concert in Ireland here in 2001.

"Weird Al" Yankovic played his first, and so far only, concert in Ireland here on October 26, 2015 during the Mandatory World Tour.

All content from Kiddle encyclopedia articles (including the article images and facts) can be freely used under Attribution-ShareAlike license, unless stated otherwise. Cite this article:
Vicar Street Facts for Kids. Kiddle Encyclopedia.