Victor Denton War Memorial is a heritage-listed memorial at Nobby Cemetery, Nobby, Queensland, Australia. It was made in 1915 by Bruce Brothers. It was added to the Queensland Heritage Register on 21 October 1992.

The Victor Denton War Memorial at Nobby was erected in 1915 and was made by Bruce Brothers, monumental masons of Toowoomba. Funds for the memorial were raised by local residents of the district, making it an uncommon example of a public memorial erected in a cemetery. The memorial honours Private Victor Denton who was killed at the Dardanelles on 16 June 1915 and is the first known memorial of the First World War erected in Queensland. The monument was unveiled on 18 November 1915 as part of the March of the Dungarees, a snowball march aimed at recruiting more soldiers for the Australian Imperial Force.

The town of Nobby is located on the Darling Downs. The first white settlers arrived on the Downs in search of rich grazing land and by the 1840s, led by the Leslie brothers and John Campbell had established over twenty stations. These stations prospered until their expansion was curbed due to the pressures of selection legislation and land was resumed for agricultural use. The area, which had previously been a primary producer of wool, diversified into wheat and dairy farming. By the 1920s, wheat had become the primary crop with Queensland Government experimental farms providing the area with superior varieties of wheat.

There were many different types of memorials in Queensland, however the broken column was more commonly used as a funereal monument, symbolic of life cut short. When the erection of memorials became prolific in Queensland, it was unusual for them to be located in cemeteries, as this one is. They were more likely to be erected in more publicly accessible places such as gardens or intersections.

The First World War Memorial is situated in a cemetery located away from the town centre. The cemetery is on a sloping site in a sparsely treed landscape, making it a dominant local landmark.

The concrete and stone memorial is located within the Denton family plot alongside the grave of Victor Denton's parents. The plot is surrounded by a low fence comprising concrete tapered plinths which are joined by a steel rod. The elevated surface is laid with octagonal pavers. 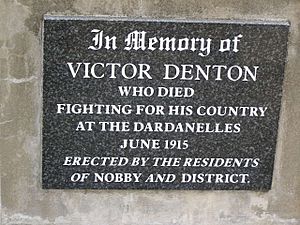 The pedestal is surmounted by a broken column with a simply moulded base.

Victor Denton War Memorial was listed on the Queensland Heritage Register on 21 October 1992 having satisfied the following criteria.

It is of particular significance as the first known memorial to the First World War, as well as being one of the few memorials dedicated to a single person and erected in a cemetery.

Erected in 1915, the war memorial at Nobby demonstrates the principal characteristics of a commemorative structure erected as an enduring record of a major historical event. This is achieved through the use of appropriate materials and design elements.

The memorial in its cemetery setting is of aesthetic significance for its landmark qualities.

It also has special association with the masonry firm of Bruce Brothers as an example of their workmanship.

All content from Kiddle encyclopedia articles (including the article images and facts) can be freely used under Attribution-ShareAlike license, unless stated otherwise. Cite this article:
Victor Denton War Memorial Facts for Kids. Kiddle Encyclopedia.