Nobby is a rural town and locality on the Darling Downs in the Toowoomba Region, Queensland, Australia. It is located halfway between Toowoomba and Warwick. In the 2016 census, Nobby had a population of 563 people.

The origin of the name Nobby is unknown. When the Western railway line from Toowoomba to Warwick was being constructed, a worker's camp known as McDonald's Camp was established in the area in 1868 and this gave its name to the general area. However, the railway siding created was known as Nobby's Siding and the area become known as Nobby. However, the township that was surveyed alongside the railway in 1891 was named Davenport after George Davenport, a former local Member of the Queensland Legislative Assembly for Drayton and Toowoomba whose pastoral run was at nearby Headington Hill. However, the Railway Department refused to rename the railway station, which created confusion having the railway station and the town with different names, leading to many people continuing to refer to the town as Nobby. Eventually the town's name was official changed back to Nobby in 1931. 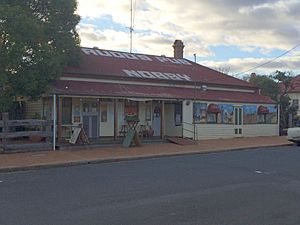 Rudd's Pub was originally built in 1893 across the road from the Nobby railway station as the Davenport Hotel; the architects were James Marks and Son. Based on local folklore that author Steele Rudd (who lived in Nobby) wrote some of his works in the pub, it was renamed Rudd's Pub in the 1980s. 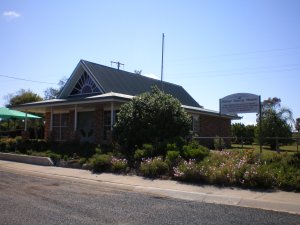 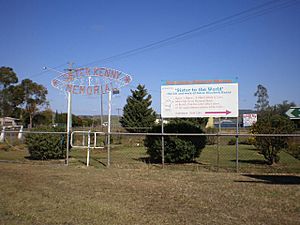 Sister Kenny House is a memorial to Sister Elizabeth Kenny who pioneered physiotherapy as a treatment for polio. This small museum holds artefacts relating to her life and therapies. 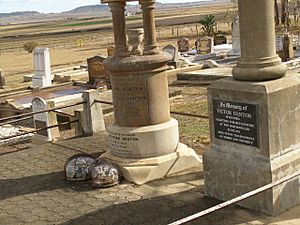 Nobby has a number of heritage-listed sites, including:

It is noted for having been home to two eminent Australians:

All content from Kiddle encyclopedia articles (including the article images and facts) can be freely used under Attribution-ShareAlike license, unless stated otherwise. Cite this article:
Nobby, Queensland Facts for Kids. Kiddle Encyclopedia.