Allora is a town and locality in south-eastern Queensland, Australia, on the Darling Downs 158 kilometres (98 mi) south-west of the state capital, Brisbane. The town is in the Southern Downs Region. The township is located on the New England Highway between Warwick and Toowoomba. At the 2011 census, Allora had a population of 889. 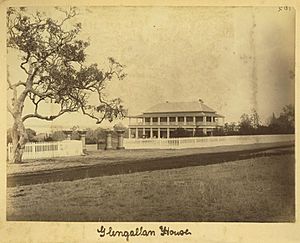 Glengallan House, near Allora, circa 1875

The region surrounding this small farming community was first explored by Europeans in the 1840s; the town was surveyed in 1859. Its name is believed to derive from an Aboriginal word "gnarrallah", meaning waterhole or swampy place.

Following European settlement, the history of the area is entwined with two famous pastoral homesteads in the vicinity of Allora: Glengallan and Talgai . Both properties ran sheep.

The original "Talgai" run was taken up by E. E. Dalrymple in 1840. The creek that runs through Allora is named in his honour. Built in 1868 for the Clark family, Talgai Homestead stood on 300,000 acres (1,200 km²). The homestead is built of sandstone and covers sixty squares. It is now a bed and breakfast.

From the 1870s, red cedar, pine and beech logged from the Goomburra valley were milled at Allora. 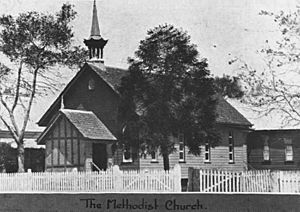 The Methodist Church opened in 1896.

The Allora Boer War Memorial was unveiled on 19 October 1904 by Colonel Henry Chauvel. 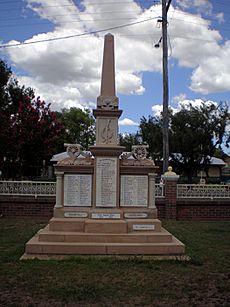 The Allora Shire Soldiers Memorial was unveiled on 11 November 1921 by General J.C. Robertson and the mothers of those who died.

In 1886 the first fossil evidence of early human occupation in the area, the Talgai skull, was found on Talgai Homestead, embedded in the wall of Dalrymple Creek. Radiocarbon dating suggests the Talgai skull is between 9,000 and 11,000 years old. It is believed to be the skull of a boy of approximately 15 years of age who had been killed by a massive blow to the side of the head. 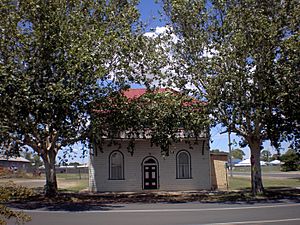 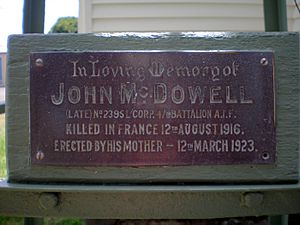 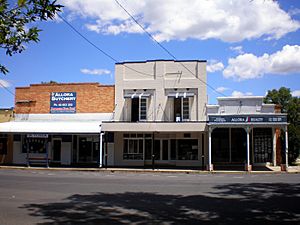 Local attractions include the Goomburra Forest Reserve, part of which was World Heritage listed in 1994 by UNESCO.

The Talgai skull is located in the Shellshear Museum, Department of Anatomy, Sydney University. A replica is found in the Allora Museum.

Allora has a number of heritage-listed sites, including:

All content from Kiddle encyclopedia articles (including the article images and facts) can be freely used under Attribution-ShareAlike license, unless stated otherwise. Cite this article:
Allora, Queensland Facts for Kids. Kiddle Encyclopedia.