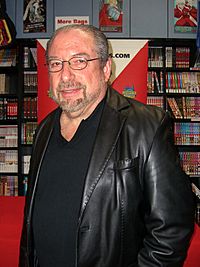 Victor Gorelick (April 5, 1941 – February 7, 2020) was an American comic book editor and executive. He was born in Brooklyn, New York. He worked for Archie Comics for over 60 years. He had many roles at the company and later became its editor-in-chief. He also taught cartooning as an instructor at Kingsborough Community College in New York City. He was given an Inkpot Award at the 2008 San Diego Comic-Con International.

All content from Kiddle encyclopedia articles (including the article images and facts) can be freely used under Attribution-ShareAlike license, unless stated otherwise. Cite this article:
Victor Gorelick Facts for Kids. Kiddle Encyclopedia.