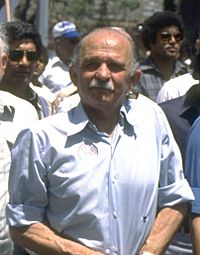 Shem-Tov was born in Samokov, Bulgaria and mostly lived in the capital Sofia. In 1939, at the age of 24, he made aliyah. The same year he joined Hashomer Hatzair.

All content from Kiddle encyclopedia articles (including the article images and facts) can be freely used under Attribution-ShareAlike license, unless stated otherwise. Cite this article:
Victor Shem-Tov Facts for Kids. Kiddle Encyclopedia.