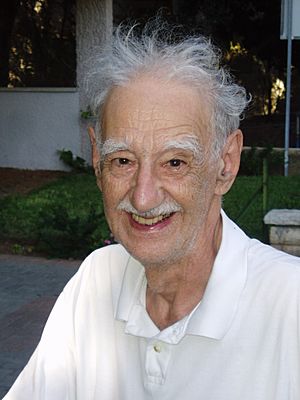 Victor (or Viktor) Abramovich Zalgaller (Russian: Виктор Абрамович Залгаллер, Hebrew: ויקטור אבּרמוביץ' זלגלר‎; 25 December 1920 – 2 October 2020) was a Russian mathematician. His focus was in the fields of geometry and optimisation. He is known for his results on convex polyhedra, linear and dynamic programming, isoperimetry and differential geometry.

Zalgaller lived in Saint Petersburg most of his life. He studied and worked at the Leningrad State University and the Saint Petersburg branch of Steklov Institute of Mathematics. He did his early work under direction of Aleksandr Danilovich Aleksandrov and Leonid Kantorovich.

Zalgaller was born in Parfino, Novgorod Governorate. He was Jewish. In 1999, he moved to Israel. Zalgaller died on 2 October 2020 at the age of 99.

All content from Kiddle encyclopedia articles (including the article images and facts) can be freely used under Attribution-ShareAlike license, unless stated otherwise. Cite this article:
Victor Zalgaller Facts for Kids. Kiddle Encyclopedia.