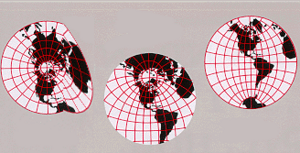 Making maps "compatible" with each other is one of the tasks of differential geometry. Calculations done on one map may not be usable on another if maps are not compatible. In the map in the center, the tropic of cancer is a smooth line; in the map on the left, it has a sharp corner. Calculations done for the map on the left cannot be re-used for the map in the center. The center map and that on the right are compatible.

Differential geometry is a field of mathematics. It uses differential and integral calculus as well as linear algebra to study problems of geometry. The theory of the plane, as well as curves and surfaces in Euclidean space are the basis of this study. Big discoveries were made in the 18th and 19th century. In geometry, the sum of the angles of a triangle is 180 degrees. Carl Friedrich Gauß wondered whether triangle bearings of ships really has a sum of angles of exactly 180 degrees; with this question he was among the pioneers of modern differential geometry.

All content from Kiddle encyclopedia articles (including the article images and facts) can be freely used under Attribution-ShareAlike license, unless stated otherwise. Cite this article:
Differential geometry Facts for Kids. Kiddle Encyclopedia.