Victoria Park, also known as Park 16 and Pakapakanthi, is a park located in the Southeastern Park Lands of the South Australian capital of Adelaide. It is bordered by Fullarton Road, Greenhill Road, East Terrace and Wakefield Road. It hosts a variety of major events throughout the year, the most prominent of which have been the Formula 1, from 1985 to 1995, and from 1999 the Adelaide 500/Clipsal 500, cancelled in 2020 for the 2021 season.

The grandstand of the former Victoria Park Racecourse has been retained

The park's most prominent feature was the Victoria Park Racecourse, formerly the home course of the Adelaide Racing Club prior to its amalgamation with the South Australian Jockey Club; the main track was 2,360 metres long, with the longest home-straight of any horse racing track in Australia. 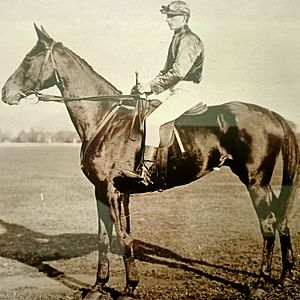 Iconic races such as the Grand National Hurdle and the Adelaide Grand National were run on the track and won by South Australia's leading cross-country jockey Jack McGowan of Brooklyn Park in the late 1800s.

Following the rejection of a proposal to upgrade horse and motor racing facilities in early 2008, the SAJC vacated the premises, moving their home course to Morphettville Racecourse. The 1950s-era SAJC grandstand was demolished, as was a large brick wall adjacent Fullarton Road and other utility buildings. The heritage-listed 1880s-era grandstand will be refurbished as part of a $16 million upgrade of the park's facilities. The park remains one of the venues for the Adelaide International Horse Trials.

Part of the Adelaide Street Circuit was built in the northern portion of the park. Temporary grandstands and other facilities were erected whenever motor racing events were hosted there. The circuit hosted the Adelaide 500 from 1999 until 2020; its cancellation for 2021 was announced due to the coronavirus pandemic, and declining attendance. It also formerly staged the Australian Grand Prix, from 1985 to 1995, and a one-off Le Mans series event, the "Race of a Thousand Years" on 31 December 2000. The park also hosts two rounds of the Australian HPV Super Series in the winter. This used to be run on part of the Adelaide 500 circuit, but is now run on a specially developed criterium circuit.

All content from Kiddle encyclopedia articles (including the article images and facts) can be freely used under Attribution-ShareAlike license, unless stated otherwise. Cite this article:
Victoria Park, Adelaide Facts for Kids. Kiddle Encyclopedia.