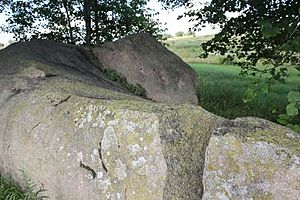 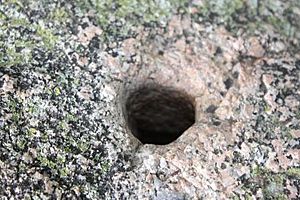 A closeup of one of the holes

The Viking Altar Rock in Sauk Centre, Minnesota, is a glacial erratic and a local landmark.

The boulder was found in 1943 and is roughly 8.2 m (27 ft) long by 5.2 m (17 ft) wide. It has four roughly triangular holes about 1 meter above the base. The rock is promoted as an attraction as part of a "Trail of the Vikings" featuring supposed evidence of Viking exploration of Minnesota. This is however conjecture.

The "altar" was rededicated in August 1975 with an ecumenical celebration of Mass.

All content from Kiddle encyclopedia articles (including the article images and facts) can be freely used under Attribution-ShareAlike license, unless stated otherwise. Cite this article:
Viking Altar Rock Facts for Kids. Kiddle Encyclopedia.