Viqueque (Tetum: Vikeke) is the largest of the districts of East Timor. The name comes from the ancient name "We Keke"; We means "water" and Keke "bracelet". 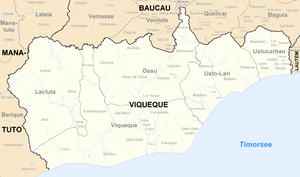 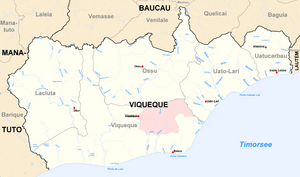 Cities and rivers of Viqueque district

It borders the districts Baucau to the north, Lautém to the east, and Manatuto to the west.

The capital of the district has the same name: Viqueque and the present district administrator is Francisco Guterres.

The Ossu subdistrict is surrounded by several mountains: Monte Mundo Perdido in the west, the Builo in the south, the Matebian massif to the east and Fatu Laritame in the north. In Monte Mundo Perdido, 16,100 hectares (40,000 acres) are protected for hunting and for the protection of birds as Important Bird Area. Here, there are many endemic species, including many rare orchids.

Viqueque is a homeland of the Malayo-Polynesian language Tetum. In East Timor it is co-official with Portuguese. In the east part of the district live speakers of the Papuan language Makasae.

All content from Kiddle encyclopedia articles (including the article images and facts) can be freely used under Attribution-ShareAlike license, unless stated otherwise. Cite this article:
Viqueque District Facts for Kids. Kiddle Encyclopedia.