Coordinates: 37°31′1″N 77°20′2.8″W﻿ / ﻿37.51694°N 77.334111°W﻿ / 37.51694; -77.334111The Virginia Aviation Museum was an aviation museum in unincorporated Henrico County, Virginia, adjacent to Richmond International Airport (formerly "Richard Evelyn Byrd Flying Field"). Erected in 1986, the museum housed a collection of some thirty-four airframes, both owned and on-loan, ranging from reproductions of Wright Brothers kite gliders to the still state-of-the-art SR-71 Blackbird. It is a subsidiary of the Science Museum of Virginia. The current building, known as the Martha C. West Building, was originally planned to be a temporary storage facility until the actual museum building finished construction.

The museum closed June 30, 2016. The SR-71 was moved to the Science Museum of Virginia where it is on display. The remainder of the collection will be relocated and preserved, though a new location has yet be determined.

WWI and Golden Age of Aviation 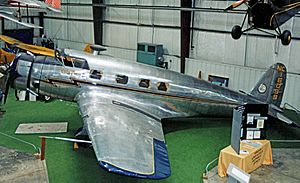 The Vultee V-1A Special at the museum

All content from Kiddle encyclopedia articles (including the article images and facts) can be freely used under Attribution-ShareAlike license, unless stated otherwise. Cite this article:
Virginia Aviation Museum Facts for Kids. Kiddle Encyclopedia.