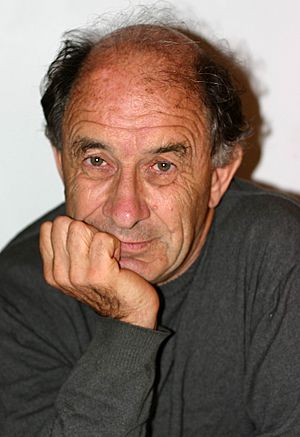 Vladimir Arnold (12 June 1937 — 3 June 2010) was a Russian mathematician of Jewish descent, said to be one of the greatest mathematicians of the 20th century. He worked in many areas of mathematics including dynamical systems, differential equations, hydrodynamics, magnetohydrodynamics, classical and celestial mechanics, geometry, topology, algebraic geometry, symplectic geometry, and singularity theory.

Arnold was born in Odessa, Ukraine. He worked at the Steklov Mathematical Institute in Moscow and later at the Moscow State University. Arnold died in Paris after going there to seek medical treatment.

He would have be given the Fields Medal in Mathematics in 1974, but this was opposed by the Soviet government. His other awards include:

All content from Kiddle encyclopedia articles (including the article images and facts) can be freely used under Attribution-ShareAlike license, unless stated otherwise. Cite this article:
Vladimir Arnold Facts for Kids. Kiddle Encyclopedia.