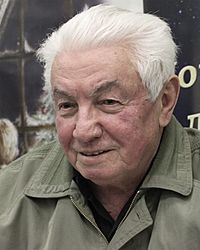 Vladimir Nikolayevich Voinovich, also spelled Voynovich (Russian: Влади́мир Никола́евич Войно́вич, 26 September 1932 – 27 July 2018) was a Russian writer, poet, playwright and journalist. He was a member of the Serbian Academy of Sciences and Arts in Department of Language and Literature. He was known for his works The Life and Extraordinary Adventures of Private Ivan Chonkin (1969–2007), Moscow 2042 (1986) and Monumental Propaganda (2000). Voinvich was born in Stalinabad, Tajik SSR.

All content from Kiddle encyclopedia articles (including the article images and facts) can be freely used under Attribution-ShareAlike license, unless stated otherwise. Cite this article:
Vladimir Voinovich Facts for Kids. Kiddle Encyclopedia.