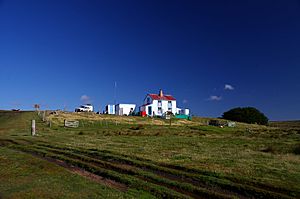 Volunteer Point is a headland on the east coast of East Falkland, in the Falkland Islands, north-northeast of Stanley, and east of Johnson's Harbour and Berkeley Sound. It lies at the end of a narrow peninsula, which protects Volunteer Lagoon. It received its name in 1815, when the sealing ship Volunteer left a boat's crew there to collect seal skins while it went in search of opportunities elsewhere. Four years later, on 13 February 1820, the French research vessel L'Uranie struck a submerged rock just off the point but stayed afloat long enough to be beached in Berkeley Sound. All on board survived, including the Captain's wife, Rose de Freycinet, who recorded the incident in her diary.

Volunteer Shanty, a well maintained outhouse that was used by trekkers until a few years ago, is situated at the landward end of the point.

Volunteer Point is one of the easternmost points of the islands, but Cape Pembroke is the furthest east. During the Falklands War, Argentine commanders considered it a potential British landing point, because it was far from continental Argentine airbases (e.g. Rio Grande, Comodoro Rivadavia), and those at Pebble Island, but also a strategic foothold for any British force wishing to retake Stanley. However, in the event, the British landings took place on San Carlos Water in the west of East Falkland, on Falkland Sound.

King penguins congregating on the beach at Volunteer Point

Volunteer Point has been identified by BirdLife International as an Important Bird Area (IBA). Birds for which the site is of conservation significance include Falkland steamer ducks (75 breeding pairs), ruddy-headed geese (100 pairs), gentoo penguins (3600 pairs as of March 2014), Magellanic penguins (estimated to be 2500 pairs as of March 2014) and white-bridled finches.

All content from Kiddle encyclopedia articles (including the article images and facts) can be freely used under Attribution-ShareAlike license, unless stated otherwise. Cite this article:
Volunteer Point Facts for Kids. Kiddle Encyclopedia.