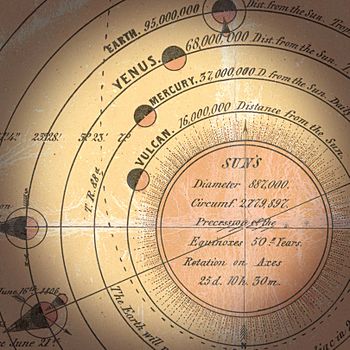 A lithography of 1846 which shows the position and the orbit of the hypothetical planet Vulcan in the solar system.

Vulcan was a theoretical planet. In the 19th century, the planet was thought to orbit close to the sun. Its gravitational pull would explain changes seen between the perihelion advance of Mercury from that predicted by Classical Mechanics. The theory that Vulcan exists come from the earlier prediction that an outer planet (now Neptune) was causing similar changes in the orbit of Uranus from the orbit predicted by classical theory.

None of the searches for Vulcan found a planet. This caused some people to not agree with Newtonian theory. It led to the development of Special Relativity and General Relativity. Albert Einstein's modified theory of gravity showed why the orbit of Mercury changes without the existence of Vulcan. This disproved the theories of Vulcan.

All content from Kiddle encyclopedia articles (including the article images and facts) can be freely used under Attribution-ShareAlike license, unless stated otherwise. Cite this article:
Vulcan (hypothetical planet) Facts for Kids. Kiddle Encyclopedia.