The W. R. Grace Building is a skyscraper in Manhattan, New York City. The building was designed principally by Gordon Bunshaft, and completed in 1974. The building was commissioned by the W.R. Grace Company, and was also used by the Deloitte & Touche, LLP.

The building is located at 1114 Sixth Avenue, but the main entrance is on 42nd Street, between Fifth and Sixth Avenues. It overlooks Bryant Park and the New York Public Library's main branch. The building size has approximately 1.518 million square feet (141,000 m2) that are rentable, and sits on a site approximately 100 by 442 feet (30 by 135 m).

The Grace Building is located on the former site of Stern's flagship department store and headquarters. Tenants include Bain & Company. The Michelin-starred restaurant Gabriel Kreuther is located in its lobby as well as a sister chocolate store. 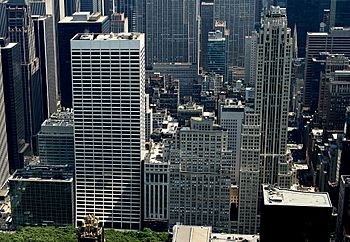 One of the aesthetic attributes of the building is the concave vertical slope of its north and south facades, on 42nd and 43rd Street. This is similar to another Bunshaft creation, the Solow Building, from which he used the initial, rejected façade design for the Grace Building. The sloping facade is also similar to the Chase Tower in Chicago. The exterior of the building is covered in white travertine, which forms a contrast against the black windows and makes the building appear brighter than those surrounding it.

All content from Kiddle encyclopedia articles (including the article images and facts) can be freely used under Attribution-ShareAlike license, unless stated otherwise. Cite this article:
W. R. Grace Building Facts for Kids. Kiddle Encyclopedia.