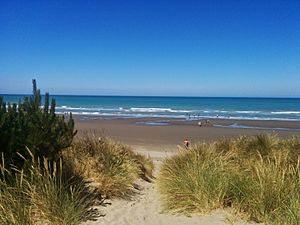 Waikuku is a small township in the Canterbury Region of New Zealand, about 35 minutes north of Christchurch. It had a population of 900 people at the time of the 2013 Census, most of whom live in on the coast at Waikuku Beach. The sandy beach and pine forests are popular with surfers, swimmers, campers and horse-riders, and the large estuary of the Ashley River hosts many species of birds.

Just south of Waikuku, on Preeces Road, are the remains of the Kaiapoi Pa, an important trading centre for Ngāi Tahu in the 18th century.

All content from Kiddle encyclopedia articles (including the article images and facts) can be freely used under Attribution-ShareAlike license, unless stated otherwise. Cite this article:
Waikuku Facts for Kids. Kiddle Encyclopedia.