Though the lower reaches of the river are braided, part of the upper river flows through a canyon known as the Ashley Gorge.

Behind Waikuku Beach is one of the largest, least modified estuaries in New Zealand. It is abundant in bird life, including the wrybill (Anarhynchus frontalis) and Black stilt (Himantopus novaezelandiae). Many migratory birds over-winter here. Surveys from 2000 to 2015, after work to clear weeds and pests, showed significant increases in banded dotterel, wrybill, black-fronted tern, and pied stilt, but black-billed gull, spur-winged plover and southern black-backed gull didn't change significantly. 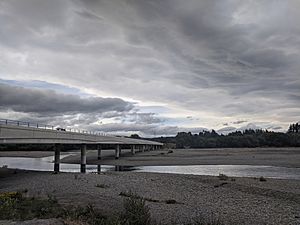 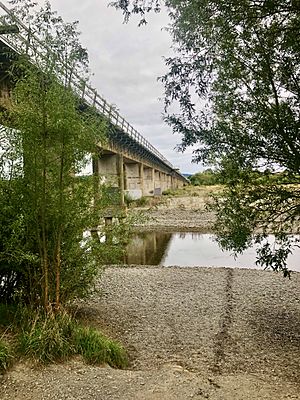 Railway bridge from south in 2021

All content from Kiddle encyclopedia articles (including the article images and facts) can be freely used under Attribution-ShareAlike license, unless stated otherwise. Cite this article:
Ashley River / Rakahuri Facts for Kids. Kiddle Encyclopedia.