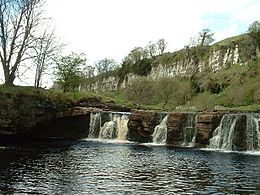 Wain Wath Force with the limestone cliffs of Cotterby Scar in the background.

Wain Wath Force is a waterfall on the River Swale in the Yorkshire Dales National Park, North Yorkshire, England. The falls are located at grid reference NY883015, 0.6 miles (1 km) upstream from the hamlet of Keld which has three other waterfalls in its vicinity (Kisdon Force, East Gill Force, and Catrake Force). The names of waterfalls in the north of England often contain "force" after the Old Norse word "foss" which means waterfall.

Its name derives from the ford above the fall, wath being the Anglo-Saxon word for a ford. Wain may denote that it was passable for a cart or wain.

Wain Wath Force is not a substantial waterfall: it has a drop of only around 1.5 metres as the river flows beneath the limestone cliffs of Cotterby Scar. Despite its modest height it is popular with visitors; the Coast to Coast long-distance footpath passes the falls on the north bank of the River Swale while the main motor road up Upper Swaledale passes on the south bank.

All content from Kiddle encyclopedia articles (including the article images and facts) can be freely used under Attribution-ShareAlike license, unless stated otherwise. Cite this article:
Wain Wath Force Facts for Kids. Kiddle Encyclopedia.