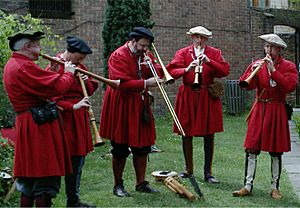 A band of modern waits

Waits or waites were British town musicians. From medieval times up to the early 19th century, every important British town and city had a band of waites. Some other countries in Europe also had waits. They were called Stadtpfeifer in Germany and Pifferi in Italy.

The duties (things they had to do) varied in different towns and at different times in history. One of their most important jobs was to play at certain times of day so that people knew what the time was. They often played from the top of church towers. Sometimes they were also guards, watching from the towers so that they could spot any danger. They were like watchmen, making sure everything was all right (there was no police at that time). They woke people up in the mornings by playing music in the streets.

The instruments they played also varied. Mostly they were loud wind instruments such as the shawm. It was a paid job. The waits wore smart liveries and silver chains of office with the town's arms.

In Germany the Stadtpfeifer would also play at church services. They would play shawms or trombones on normal days, but trumpets and drums on feast-days.

In Britain there were no more waits after 1835. The name “waits” is still used in “Christmas Waits” (any group of people singing carols at Christmas).

All content from Kiddle encyclopedia articles (including the article images and facts) can be freely used under Attribution-ShareAlike license, unless stated otherwise. Cite this article:
Waits Facts for Kids. Kiddle Encyclopedia.