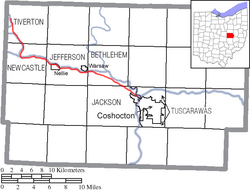 The Walhonding Canal was a canal in Coshocton County, Ohio that was used as a feeder canal for the Ohio and Erie Canal. A small canal, at only 25 miles (40.2 km) long, it was wholly contained within Coshocton County, following the Mohican River from Cavallo south to the confluence with the Kokosing River, which together with the Mohican forms the Walhonding River. The canal followed the Walhonding River southeast toward Coshocton where it met the Ohio and Erie Canal in Roscoe Village.

Building of the Walhonding Canal commenced in 1836 and finished in 1842. William H. Price, Charles J. Ward, John Waddle, Jacob Blickensderfer, Henry Fields and Sylvester Medbery were among the members of the engineering corps responsible for the Walhonding Canal. Several of these men also served as contractors on the Ohio and Erie Canal. In addition to these were John Frew, S. Moffit, Isaac Means, John Crowley, W. K. Johnson and others. It cost $607,268.99, or an average of $24,290.76 per mile.

The Superintendents of the Walhonding canal were Langdon Hogle, John Perry, William E. Mead and Charles H. Johnson. The first canal boat launched in the county was called the "Renfrew" in honor of James Renfrew, a merchant of Coshocton. It was built by Thomas Butler Lewis, an old Ohio keel-boatman.

It was intended to have the Walhonding canal extended to the northwestern part of Ohio, but there was already much talk of speedier mode of conveyance in 1842. The work being very expensive, and the members of the legislature from districts where canals were no longer regarded as practicable were unwilling to support the necessary appropriations. Two years after initial approval of the canal, the Board of Public Works lobbied for authorization of extensions for the canal. One proposal was a 23 miles (37.0 km) extension north along the Mohican River and the other proposal was a 21 miles (33.8 km) extension west along the Kokosing River toward Mount Vernon in Knox County. By 1844 the lobbyists for extensions realized neither would gain approval and they soon stopped requesting appropriations.

The extensions up the Kokosing River to Mount Vernon and north along the Mohican River to Loudonville was first authorized by the Ohio General Assembly on March 10, 1838. The extension to Mount Vernon was contingent on the Mount Vernon Lateral Canal Company surrendering to the state their charter, rights, and privileges that would have interfered with the state of Ohio's interest in construction of the canal. The extensions would have to be surveyed and approved by the Ohio Board of Public Works before construction could begin and they would have to operate at cost seven years after completion.

The state officially abandoned the Walhonding Canal in 1896 and the railroad that took its place continued to operate until 1936 when the Mohawk Dam was built for flood control, effectively cutting off the right-of-way.

All content from Kiddle encyclopedia articles (including the article images and facts) can be freely used under Attribution-ShareAlike license, unless stated otherwise. Cite this article:
Walhonding Canal Facts for Kids. Kiddle Encyclopedia.