Kids Encyclopedia Facts
This page is about the city in Knox County. For the neighborhood in Columbus, Ohio, see Mount Vernon, Columbus, Ohio.

Mount Vernon is a city in Knox County, Ohio, United States. It is located 40 miles (64 km) northeast of Columbus. The population was 16,990 at the 2010 census. It is the county seat of Knox County.

The community was platted in 1805, and named after Mount Vernon, the plantation owned by George Washington.

On January 1959 a severe flood caused 500 homes to be evacuated and caused $5 million in damage. In August 2006, an F0 tornado touched down on the west side of town. It demolished a barn at the local 84 Lumber, and the resulting debris blew across the road to the DeCosky GM car dealership. It caused at least $150,000 of damage.

The Woodward Opera House, the oldest opera theater of its kind in the United States, is located downtown. The theater is currently under major renovation and will, upon its completion, be transformed into a local cultural and performing-arts center.

The Knox County Historical Society, with a building and extensive exhibits, makes its headquarters on Harcourt Road in Mount Vernon. Exhibits feature information about Daniel Decatur Emmett, Paul Lynde, The Cooper Company and other subjects. 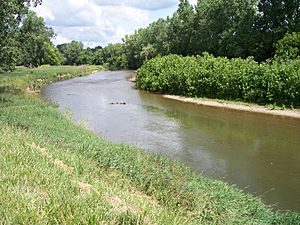 The Kokosing River in Mount Vernon in 2006.

The Kokosing River and U.S. Route 36 pass through the city.

Mount Vernon was the birthplace of Cooper Industries. There is a large industrial complex in the western part of the city that manufactures and repairs products for the gas and oil power generation industries. It was acquired by Rolls-Royce North America, and in 2014 Siemens bought the Mount Vernon plant. Facing a declining market, Siemens announced major reductions in employment in October 2016 and in 2018 announced their Mount Vernon facility would close by 2019.

All content from Kiddle encyclopedia articles (including the article images and facts) can be freely used under Attribution-ShareAlike license, unless stated otherwise. Cite this article:
Mount Vernon, Ohio Facts for Kids. Kiddle Encyclopedia.