John Chapman (September 26, 1774 – March 18, 1845), better known as Johnny Appleseed, was an American pioneer nurseryman who introduced apple trees to large parts of Pennsylvania, Ontario, Ohio, Indiana, and Illinois, as well as the northern counties of present-day West Virginia. He became an American legend while still alive, due to his kind, generous ways, his leadership in conservation, and the symbolic importance he attributed to apples.

He was also a missionary for The New Church (Swedenborgian) and the inspiration for many museums and historical sites such as the Johnny Appleseed Museum in Urbana, Ohio, and the Johnny Appleseed Heritage Center in Ashland County, Ohio. The Fort Wayne TinCaps, a minor league baseball team in Fort Wayne, Indiana, where Chapman spent his final years, is named in his honor.

John Chapman was born in Leominster, Massachusetts. His birthplace has a granite marker, and the street is called Johnny Appleseed Lane. John began his apprenticeship as an orchardist under a Mr. Crawford, who had apple orchards, thus inspiring his life's journey of planting apple trees.

The popular image is of Johnny Appleseed spreading apple seeds randomly everywhere he went. In fact, he planted nurseries rather than orchards, built fences around them to protect them from livestock, left the nurseries in the care of a neighbor who sold trees on shares, and returned every year or two to tend the nursery. His first nursery was planted on the bank of Brokenstraw Creek, south of Warren, Pennsylvania.

Next, he seems to have moved to Venango County along the shore of French Creek, but many of these nurseries were in the Mohican area of north-central Ohio. This area included the towns of Mansfield, Lisbon, Lucas, Perrysville, and Loudonville.

More controversially, he also planted dogfennel during his travels, believing it to be a useful medicinal herb. It has now come to be regarded as a noxious, invasive weed.

He preached the gospel as he traveled, and during his travels he converted many Native Americans, whom he admired. The Native Americans regarded him as someone who had been touched by the Great Spirit, and even hostile tribes left him strictly alone. He would tell stories to children and spread The New Church gospel to the adults, receiving a floor to sleep on for the night, and sometimes supper, in return.

During his later life, he was a vegetarian. He never married. He thought he would find his soulmate in heaven if she did not appear to him on earth. 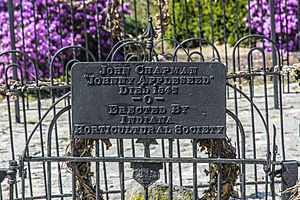 Different dates are listed for his death. The Goshen Democrat published a death notice for him in its March 27, 1845, edition, citing the day of death as March 18 of that year. The site of his grave is also disputed. According to an 1858 interview, Chapman was buried "respectably" in the Archer cemetery.

The Johnny Appleseed Commission Council of the City of Fort Wayne reported, "As a part of the celebration of Indiana's 100th birthday in 1916 an iron fence was placed in the Archer graveyard by the Horticulture Society of Indiana setting off the grave of Johnny Appleseed. At that time, there were men living who had attended the funeral of Johnny Appleseed. Direct and accurate evidence was available then. There was little or no reason for them to make a mistake about the location of this grave. They located the grave in the Archer burying ground."

Johnny Appleseed left an estate of over 1,200 acres (490 ha) of valuable nurseries to his sister. He also owned four plots in Allen County, Indiana, including a nursery in Milan Township with 15,000 trees, and two plots in Mount Vernon, Ohio. He bought the southwest quarter (160 acres) of section 26, Mohican Township, Ashland County, Ohio, but he did not record the deed and lost the property.

In Fort Wayne, since 1975, the Johnny Appleseed Festival has been held the third full weekend in September in Johnny Appleseed Park and Archer Park. Musicians, demonstrators, and vendors dress in early 19th century attire and offer food and beverages that would have been available then.

In 2008 the Fort Wayne Wizards, a minor league baseball club, changed their name to the Fort Wayne TinCaps. The first season with the new name was in 2009. That same year the Tincaps won their only league championship. The name "Tincaps" is a reference to the tin hat (or pot) Johnny Appleseed is said to have worn. Their team mascot is also named "Johnny." 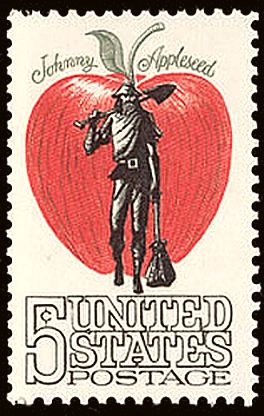 There is a memorial in Spring Grove Cemetery in Cincinnati, a circular garden surrounds a large stone upon which a bronze statue of Chapman stands, face looking skywards, holding an apple seedling tree in one hand and a book in the other. A bronze plaque identifies him as Johnny Appleseed with a brief biography and eulogy.

March 11 and September 26 are sometimes celebrated as Johnny Appleseed Day. The September date is Appleseed's acknowledged birthdate, but the March date is sometimes preferred because it is during planting season.

Johnny Appleseed Elementary School is a public school in Leominster, Massachusetts, his birthplace. Mansfield, Ohio, one of Appleseed's stops, was home to Johnny Appleseed Middle School until it closed in 1989.

A large terracotta sculpture of Johnny Appleseed decorates the front of the Lakewood High School Civic Auditorium in Lakewood, Ohio.

All content from Kiddle encyclopedia articles (including the article images and facts) can be freely used under Attribution-ShareAlike license, unless stated otherwise. Cite this article:
Johnny Appleseed Facts for Kids. Kiddle Encyclopedia.