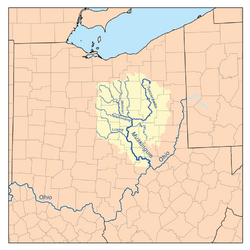 Map of the Muskingum River watershed showing the Licking River 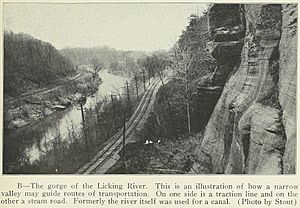 Historic view of the Licking River from "Geography of Ohio," 1923

The Licking River is a tributary of the Muskingum River, about 40 mi (65 km) long, in central Ohio in the United States. Via the Muskingum and Ohio Rivers, it is part of the watershed of the Mississippi River.

The Licking River is formed at Newark in Licking County by the confluence of its north and south forks including many other small fishable streams.

From Newark, the Licking River flows generally eastwardly through the Black Hand Gorge State Nature Preserve into Muskingum County, where it turns southeastwardly. It joins the Muskingum River at Zanesville; the confluence of the two rivers is spanned by a Y-shaped bridge.

Upstream of Zanesville, a U.S. Army Corps of Engineers dam causes the river to form Dillon Lake, along which an Ohio state park is located.

Jonathan Chapman (1775-1843), aka Johnny Appleseed, planted his first apple orchard near Licking Creek. He took a load of apple seed from Pennsylvania cider presses into the Territory of Ohio in 1801, according to a Harper magazine article written in November 1871, "Johnny Appleseed - A Pioneer Hero" by W.D. Haley (pp. 830–836).

Long, long after, When settlers put up beam and rafter, They asked of the birds, "Who gave this fruit? Who watched this fence till the seeds took root? Who gave these boughs?" They asked the sky, And there was no reply. But the robin might have said, "To the farthest west he has followed the sun, His life and his empire just begun." Self-scourged, like a monk, with a throne for wages, Stripped, like the iron-souled Hindu sages, Draped like a statue, in strings like a scarecrow, His helmet-hat an old tin pan, But worn in the love of the heart of man, More sane than the helm of Tamerlane! Hairy Ainu, wild man of Borneo, Robinson Crusoe - Johnny Appleseed!

And the robin might have said, "Sowing he goes to the far new West, With the apple, the sun of his burning breast- The apple allied to the thorn, Child of the rose."

According to the Geographic Names Information System, the Licking River has also been known as:

All content from Kiddle encyclopedia articles (including the article images and facts) can be freely used under Attribution-ShareAlike license, unless stated otherwise. Cite this article:
Licking River (Ohio) Facts for Kids. Kiddle Encyclopedia.