Scheel was born in Solingen. During World War II, he served in the Luftwaffe, the last years of the war as a Radar operator on a Me 110 night fighter.

He was federal minister of economic cooperation and development (1961-1966), but he persuaded the FDP to leave Ludwig Erhard's coalition government in late 1966. This forced elections in Germany, and Kurt Georg Kiesinger became chancellor.

In 1969 his party formed a new coalition with the Social Democrats. He became Foreign Minister and Vice Chancellor. With Willy Brandt his foreign policy meant the Federal Republic of Germany promised not to try and get back the parts of Germany given to Poland and the USSR. The treaty with Poland actually defined the western border of Poland, not the border between Poland and Germany. It is the same thing, but meant Poland could sign a treaty with West Germany that described the border of East Germany.

When Brandt resigned on 7 May 1974, Scheel, was acting chancellor, for about a week, until Helmut Schmidt was elected Chancellor. 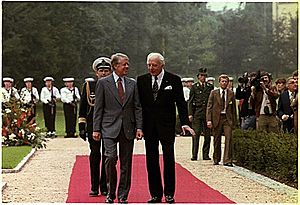 A few weeks later, Scheel was elected Federal President of West Germany, a post he held from July 1974 until June 1979.

Like most ex German presidents, Scheel retired from political life term ended. He sometimes appeared on political talk shows or events. At the funeral of the murdered businessman Hanns Martin Schleyer in October 1977, Scheel gave a speech entitled shame.

All content from Kiddle encyclopedia articles (including the article images and facts) can be freely used under Attribution-ShareAlike license, unless stated otherwise. Cite this article:
Walter Scheel Facts for Kids. Kiddle Encyclopedia.