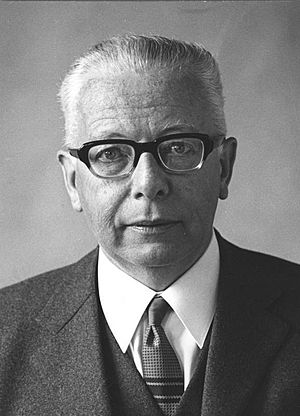 Gustav Walter Heinemann (born 23 July 1899 in Schwelm; died 7 July 1976 in Essen) was a German politician. He was Interior Minister under Chancellor Konrad Adenauer. He resigned when Adenauer started getting ready to set up the German Army. He later resigned from the CDU and joined the SPD. He also served as Justice Minister before he was elected Federal President in 1969. He served for one term, and left office in 1974.

All content from Kiddle encyclopedia articles (including the article images and facts) can be freely used under Attribution-ShareAlike license, unless stated otherwise. Cite this article:
Gustav Heinemann Facts for Kids. Kiddle Encyclopedia.