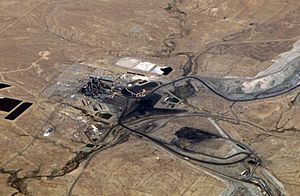 San Juan Generating Station (PNM) 2012. Mine is just to the right of this photo.

Waterflow is an unincorporated community in San Juan County, New Mexico, United States on the north side of the San Juan River. It is immediately west of Fruitland and north across the river from the Navajo Indian Reservation. It is east of Shiprock.

Waterflow is a high desert valley with the highest point being a geological hogback called "Hogback". The San Juan River and Shumway Arroyo are important water resources in the area. 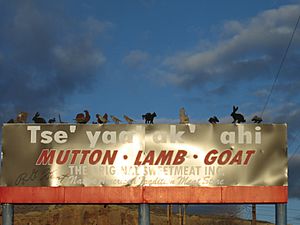 Advertising for Original Sweetmeat Inc. The billboard includes the apparent modern Navajo name for the place.

The area now known as Waterflow is traditional Navajo territory. This place was called Chʼį́įdii Łichííʼ (Red Devil) in reference to Walter Stallings who operated a trading post in the area; nowadays, Tséyaa Akʼahí (beneath-rock oil) seems to be another designation in reference to the nearby oil fields, as can be seen on billboards in the area (pictured).

The early Anglo settlers in this area named the place "Jewett Valley", and established Jewett Valley Cemetery as early as 1886. Although some reports say these pioneers were predominantly Catholic, one of the earliest families to be buried in this cemetery, the Hunts, have long been LDS.

Catholicism in Waterflow, New Mexico dates from February 22, 1912, when the first Mass was celebrated there in makeshift quarters. Three young men, Joseph and Lorenzo Stallings of Kentucky and David Watson of Georgia, Catholics, were among the pioneer settlers of the region. They called on the Franciscan Fathers at Farmington for help in establishing a church at Waterflow, which they called “Kentucky Mesa.” Sacred Heart Church was dedicated May 16, 1917.

The town was named "Jewett" in P. F. Collier's atlas as early as 1923. The local Catholic church remained a mission of Farmington but began to have a resident pastor in 1945. Since 1982, the Latter-day Saints have serviced their people in this area through the Kirtland Stake which covers from Kirtland west to Shiprock, New Mexico and beyond.

All content from Kiddle encyclopedia articles (including the article images and facts) can be freely used under Attribution-ShareAlike license, unless stated otherwise. Cite this article:
Waterflow, New Mexico Facts for Kids. Kiddle Encyclopedia.