Waterford is a village located on St. Paul Street in North Smithfield, Rhode Island and Blackstone, Massachusetts. The Branch River flows through the village. 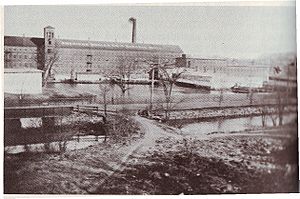 Turn-of-the 20th century photo of Mammoth Mill (1864) off Canal Street with the old Blackstone Canal (1828) and Blackstone River in the foreground.

Waterford was developed in 1824 by Welcome Farnum, a Yankee entrepreneur, who purchased land, built a dam on the Branch River, and constructed the first textile mill called Red Mill. He named the village Waterford because many of the Irish workers in his mill came from Waterford, Ireland. The last mills in the area was constructed mid-nineteenth century. Waterford is home to several St. Paul's Church, originally serving a largely Irish population, and its adjacent school, and many businesses.

All content from Kiddle encyclopedia articles (including the article images and facts) can be freely used under Attribution-ShareAlike license, unless stated otherwise. Cite this article:
Waterford, Rhode Island Facts for Kids. Kiddle Encyclopedia.