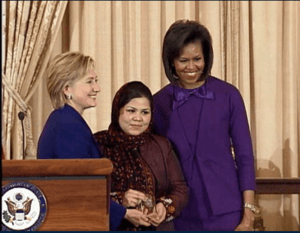 Wazhma Frogh is a women's rights activist from Afghanistan. In 2009, she received the International Women of Courage Award.

In the eighth grade, Frogh taught her landlord's children, so that the landlord would reduce her rent. She wanted money so she and her sisters could go to school. At age 17, she worked as an intern at a newspaper in Pakistan. Because of her job, she saw the difficult lives of the women in Afghan refugee camps.

From 1992 to 2001, Frogh lived in Peshawar, Pakistan, while she started programs for women in Aghanistian. In 2002 Frogh finished the first study of women’s conditions in Nuristan, Afghanistan. Frogh also helped start women's centers in the Kandahar, Ghazni, Herat, and Parwan provinces of Afghanistan.

Frogh helped start the Afghan organization "Research Institute for Women". She became the director. In 2013, she wanted to visit the United States after she wrote about a militia commander in a report to NATO. The militia commander was a repeat abuser of rights. The militia commander threatened Frogh and her sisters. The Institute of Inclusive Security invited Frogh to come to the U.S. as a visiting fellow, but her visa was refused. Frogh also wrote for The Guardian on the subject of Afghanistan.

All content from Kiddle encyclopedia articles (including the article images and facts) can be freely used under Attribution-ShareAlike license, unless stated otherwise. Cite this article:
Wazhma Frogh Facts for Kids. Kiddle Encyclopedia.