Kids Encyclopedia Facts
For the places formerly with this name, see Algoso, California and Patch, California. 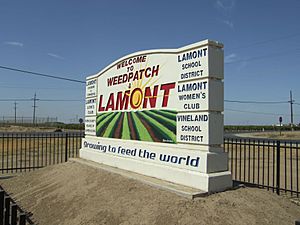 Welcome sign on California State Highway 184 for Weedpatch and the neighboring community of LaMont.

Weedpatch (formerly Weed Patch and Alexander's Corner) is an unincorporated community in Kern County, California. Weedpatch is 10 miles (16 km) south-southeast of Bakersfield. It is considered to be one of the poorest areas in Kern County.

Although the name Weed Patch was applied to the site as early as 1874, the community began only in 1922. The town was also named Alexander's Corner in honor of Cal Alexander, a resident.

Weedpatch is the site of the Arvin Federal Government Camp, known colloquially (and in the John Steinbeck novel The Grapes of Wrath) as "Weedpatch Camp." This camp was a government rescue center for distressed migrant workers fleeing the Oklahoma Dust Bowl, during the Great Depression. The camp still aids migrant workers.

The 2010 United States Census reported that Weedpatch had a population of 2,658, with a median household income of $28,075 and just above 45.8% living at or below the poverty level. It is considered to have a young population, with a median age of 22.7.

All content from Kiddle encyclopedia articles (including the article images and facts) can be freely used under Attribution-ShareAlike license, unless stated otherwise. Cite this article:
Weedpatch, California Facts for Kids. Kiddle Encyclopedia.