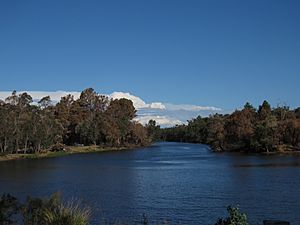 Wellington National Park is a national park in Western Australia, located 10 kilometres (6 mi) west of Collie and approximately 215 km (134 mi) south of Perth in the Shire of Collie along the Coalfields Highway.

The 17,000 ha (42,000-acre) park has a hilly terrain and is intersected by streams; the Collie River valley is in the middle of the park, as is Wellington Dam. The park is within the Yilgarn Craton geological province composed of belts of metamorphosed sedimentary and volcanic rocks, including large areas of granite.

Potter's Gorge has a camping area at the edge of a lake, catering for tents and caravans. There are also barbeques, picnic tables and multi-access toilets. Honeymoon Pool also has a camping area and the river is safe for swimming and canoeing. There are picnic tables, barbeques, fire pits with wood supplied and toilets. A boardwalk and platform are built on the river bank for ease of access and there are several walk trails throughout the area. The area around Wellington Dam has a kiosk and a camping area.

All content from Kiddle encyclopedia articles (including the article images and facts) can be freely used under Attribution-ShareAlike license, unless stated otherwise. Cite this article:
Wellington National Park Facts for Kids. Kiddle Encyclopedia.