West Bend is a city in Kossuth and Palo Alto (originally) counties in the U.S. state of Iowa. The population was 785 at the 2010 census.

West Bend had its start in the early 1880s by the building of the Burlington, Cedar Rapids and Northern Railway through that territory. It was originally called Ives after the president of the railroad, but the townspeople had it changed to West Bend from the bend in the river. West Bend (aka Ives) was the first town in Palo Alto County. A special five cent tax to build a railroad station was promised to the railroad if they would create a stop when the railroad was built. The railroad did that placing the line and the new station in West Bend.

According to the United States Census Bureau, the city has a total area of 0.89 square miles (2.31 km2), all land.

West Bend is served by a lightly-used former branch line of the Rock Island Railroad now owned by the Union Pacific Railroad.

There were 360 households of which 20.8% had children under the age of 18 living with them, 51.7% were married couples living together, 4.4% had a female householder with no husband present, 3.1% had a male householder with no wife present, and 40.8% were non-families. 38.1% of all households were made up of individuals and 23.6% had someone living alone who was 65 years of age or older. The average household size was 2.07 and the average family size was 2.71.

There were 352 households of which 25.0% had children under the age of 18 living with them, 54.8% were married couples living together, 3.1% had a female householder with no husband present, and 40.1% were non-families. 37.2% of all households were made up of individuals and 24.4% had someone living alone who was 65 years of age or older. The average household size was 2.21 and the average family size was 2.95. 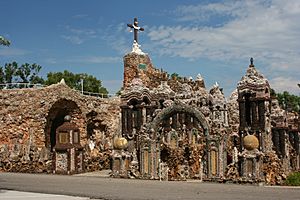 Grotto of the Redemption

West Bend is the site of the Grotto of the Redemption, a series of nine contiguous grottos occupying a full city block, constructed of minerals, petrifications, and semiprecious gems. The Grotto of the Redemption is the inspiration and life work of Fr. Paul Dobberstein (1872-1954), a Catholic priest who settled in West Bend around 1902. For a decade he gathered rocks and precious and semi-precious stones from around the world beginning construction in 1912. For the next 42 years, Fr. Dobberstein created hundreds of intricate rock settings that form the Grotto’s walls and ceilings, evoking a spiritual experience. Matt Szerensce, a parishioner, and Fr. Louis Greving, the next Catholic pastor in West Bend, worked side-by-side with Fr. Dobberstein and furthered the work of Fr. Dobberstein after his death in 1954. Although the Grotto was technically finished in the late 1980, the Grotto is an ongoing work with restorations and repairs made yearly and there are still some statues that need to be purchased to complete certain scenes throughout the Grotto. The Grotto is non-profit and relies solely on donations for its maintenance and repair work.

The Grotto of the Redemption is the largest man-made grotto in the world and has an estimated 25-30 thousand visitors a year. The nine separate grottoes each depict a scene in the life of Jesus of Nazareth or of the testament of God. The theme of Redemption gives unity to this sacred space. Although the Grotto was built by a Catholic priest, Fr. Dobberstein, who was an avid rock hound, wanted the Grotto to be "non-denominational" or for all religions to appreciate and enjoy. His hope was to have the Grotto speak to all through the natural beauty of the stones and their arrangements.

All content from Kiddle encyclopedia articles (including the article images and facts) can be freely used under Attribution-ShareAlike license, unless stated otherwise. Cite this article:
West Bend, Iowa Facts for Kids. Kiddle Encyclopedia.