West Dundee is a village in Kane County, Illinois, United States. The population was 7,331 as of the 2010 US Census. It is considered a far west Chicago suburb.

West Dundee lies across the Fox River from East Dundee and Carpentersville. 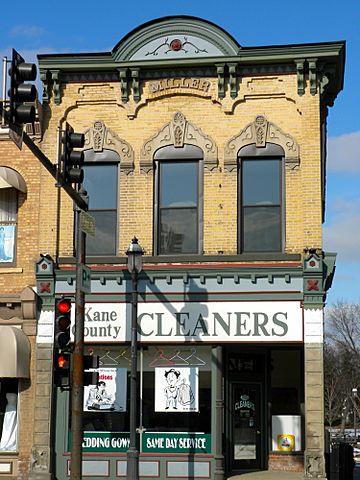 The Miller Building at First and Main

There were 2,059 households out of which 37.0% had children under the age of 18 living with them, 59.4% were married couples living together, 7.8% had a female householder with no husband present, and 29.4% were non-families. 24.3% of all households were made up of individuals and 8.3% had someone living alone who was 65 years of age or older. The average household size was 2.64 and the average family size was 3.18.

In 1835 Elder John and Nancy Oatman established a tavern and a store that became the core of the community. Others settlers came, and in 1837 they held a lottery to determine who would name the town. Alexander Gardiner won and named the town Dundee in honor of his Scottish hometown, with which West Dundee is now sister cities. In 1843 Scotsman Allan Pinkerton, later the renowned detective, set up business as a cooper. The town was incorporated in 1887.

Dundee was hemmed in from development for years. The Fox River formed a natural eastern barrier. To the north and west, the D. Hill Nursery, founded in 1855 by William Hill, specialized in fruit trees. The business grew to include evergreens, some of which were sent to Chicago for the World's Columbian Exposition in 1893. Expanding to 900 acres, the nursery survived the Great Depression by running a cattle feed operation that continued through World War II. Some of the thousands of seasonal workers traveled to work from Chicago by electric rail, while the majority lived on the nursery grounds.

In the 1950s a segment of the Hill property was sold and turned into the Highlands subdivision, which was annexed into West Dundee in 1956. The community also annexed property west of Illinois 31 in 1957, Royal Lane in 1960, and the Old World subdivision in 1966. The nursery eventually sold all of its land and moved to McHenry County. Plans for the Spring Hill Mall on Hill's land began in 1973 and the project was completed in 1980. The 1.1 million-square-foot mall's retail sales boosted West Dundee's economy and created an estimated 1,600 jobs by 1982. New subdivisions were built to the west of Spring Hill Mall.

With a population of 7,331 (2010 Census data), West Dundee has managed to keep its quaintness and small-town feeling intact. Designated historical sites fill the downtown and surrounding residential neighborhood. Restored buildings include structures reported to have provided refuge for slaves on the Underground Railroad. Portions of downtown West Dundee are included with the Dundee Township Historic District on the National Register of Historic Places.

In the tradition of Charles Dickens' A Christmas Carol, each year during the first weekend of December (second weekend after Thanksgiving) downtown East and West Dundee come to life in a Victorian Christmas celebration with small town atmosphere. Dickens in Dundee includes tree lighting ceremonies, visits from Santa and live portrayals of Christmas scenes in the merchant windows along Main Street, the Spirit of Christmas Parade, Gingerbread House Making, Festival of Trees, Santa's Petting Zoo and Christmas tree sales by the Dundee Lions Club in Grafelman Park. For more information, please visit the Dickens in Dundee website.

Each year, Dundee holds a large St. Patrick's Day celebration that takes place in the quaint downtown area. Festivities include the "Dublindee Kilted 5K" where participants are encouraged to wear kilts or other festive attire. All donations go toward the FISH Food Pantry. The parade route stretches throughout the community and includes local high school and veteran groups. One crowd favorite event would be the annual Big Wheel race sponsored by local Emmet's Brewing Company. The competition consists of adults racing down a nearby steeply declining road on children's plastic Big Wheel bikes. Participants are encouraged to bring along duct tape for "repairs in the field". The St. Patrick's Day celebration continues to grow each year and is a longtime Dundee tradition.

Concerts & Movies in the Park

Each summer, the Dundee Township Park District puts on a series of free live concerts and occasionally a big screen movie in the Dundee area parks. Grafelman Park in West Dundee plays host to several such events, typically during the month of July, with locations in East Dundee and Carpentersville hosting during June and August (weather permitting). For more information, please visit the Dundee Township Park District website.

All content from Kiddle encyclopedia articles (including the article images and facts) can be freely used under Attribution-ShareAlike license, unless stated otherwise. Cite this article:
West Dundee, Illinois Facts for Kids. Kiddle Encyclopedia.