Kids Encyclopedia Facts
This page is about the Tri-Rail and Amtrak station. For the Brightline station, see West Palm Beach station (Brightline). 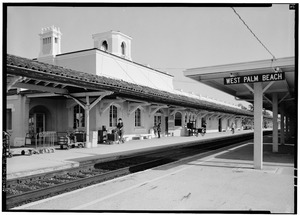 The station under operation by the Seaboard Airline Railway

The City of West Palm Beach, following a purchase of the building in 1988, tapped local architecture firm Oliver Glidden & Partners to head a $4.3 million restoration of the structure. The project was completed and the station rededicated in a ceremony attended by the Florida Governor in April 1991. Architect Robert D. Brown directed the restoration of ornamental cast stone elements, exterior masonry, doors, windows, and iron and tile work. The red clay tile roof was replaced, as were the electrical, lighting, plumbing and heating, ventilation and air conditioning systems. Abatement of lead and asbestos was further required to bring the historic structure up to modern building code standards. The restoration effort earned the Florida Trust Award for Historic Preservation in 1994.

In summer 2012, the city finished an improvement project that included the installation of new sidewalks and more than five dozen trees around the building. The improvements were funded with a $750,000 Transportation Enhancement grant from the Federal Highway Administration, to which the city provided a $150,000 local match. 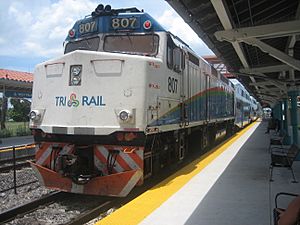 All content from Kiddle encyclopedia articles (including the article images and facts) can be freely used under Attribution-ShareAlike license, unless stated otherwise. Cite this article:
West Palm Beach station Facts for Kids. Kiddle Encyclopedia.