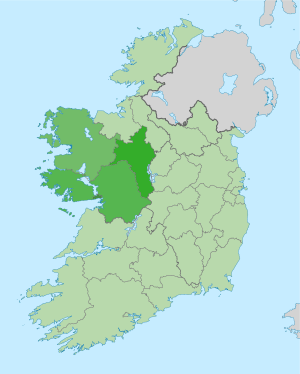 The West region of Ireland, with each constituent county/city council highlighted

The West Region (coded IE013) is a NUTS Level III statistical region of Ireland. It consists of the territory of the city of Galway and the counties of Galway, Mayo and Roscommon. The West region spans 13,801 km² (20% of the total area of the state) and has a population of 380,057 (8% of the state's total).

The region is located on the western seaboard of Ireland with the Atlantic Ocean to the west and the River Shannon delimiting the region to the east. The West Region is largely rural, with only 30% of its population living in urban areas. It is noted for its continuance of Irish traditions, such as the Irish language in the region's Gaeltacht areas.

According to the 2006 census, the region had a population of 380,057, which constitutes 9.7% of the national population. Its population density was 27 persons per km². The population of the regional capital, Galway City, was 72,414.

There is an international airport in the region – Ireland West Airport Knock, and Shannon Airport is 50km south of the region – both of which are served by flights to the United Kingdom, and continental Europe. Mainline rail services operate from both Galway and Mayo to Dublin. The M6 motorway, connecting Galway to Dublin, was completed in 2009.

The Western Railway Corridor has yet to be fully reopened for passenger and goods trains.

A list of the largest urban areas in the West Region. County capitals are shown in bold.

All content from Kiddle encyclopedia articles (including the article images and facts) can be freely used under Attribution-ShareAlike license, unless stated otherwise. Cite this article:
West Region, Ireland Facts for Kids. Kiddle Encyclopedia.