Athenry ( Irish: Baile Áth na Ríogh, meaning Town of the Ford of the Kings) is a town in County Galway, Ireland, which lies 25 kilometres (16 mi) east of Galway city. Some of the attractions of the medieval town are its town wall, Athenry Castle, its priory and its 13th century Anglo-Norman street-plan. The town is also well known by virtue of the song "The Fields of Athenry". 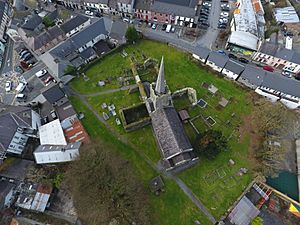 Its name derives from the ford ('Áth') crossing the river Clarin just east of the settlement. Though other inaccurate explanations are still given, it was called 'Áth na Ríogh' ('Ford of the Kings') because it was the home area of the Cenél nDéigill, kings of the Soghain, whose leading lineage were the Ó Mainnín [1]. On some medieval maps of English origin the town is called Kingstown.

Originally, Soghain was surrounded by Uí Maine to the east, Aidhne to the south, and Maigh Seola to the west. However after 1135, and by 1152, Tairrdelbach Ua Conchobair forcibly incorporated it into the newly-created trícha cét of Clann Taidg, ruled by lords such as Fearghal Ó Taidg an Teaghlaigh, who expelled the Ó Mainnín family. In the 1230s the Ó Taidg an Teaghlaigh family were in turn displaced by Meyler de Bermingham [2].

The earliest remaining building in the town is Athenry Castle which was built sometime before 1240 by Meyler de Bermingham. In 1241, the Dominican Priory was founded, and became an important center for learning and teaching. It was ostensibly closed during the Protestant Reformation but survived until being desecrated and burned during the Mac an Iarla wars of the 1560s-80s, and was finally vandalised by Cromwellians in the 1650s. The medieval walls around Athenry are among the most complete and best preserved in Ireland with 70% of original circuit still standing, along with some of the original towers and the original North gate. The remains of the Lorro Gate were partially unearthed in 2007 during redevelopment road works in the area.

In the centre of the town is the 'square'; markets were held from the 17th century onwards and where the town's late 15th century 'Market Cross' is still located. The monument which is of Tabernacle or Lantern type is the only one of its kind in Ireland and the only medieval cross still standing in situ in the country. A Heritage centre now occupies the remains of the mid-13th century St Mary's Collegiate Church adjacent to the town Square. The original medieval church is largely destroyed but in 1828 a Church of Ireland church was built into its chancel.

In 1791, Caquebert de Montbret visited the town, which he described as:

[covering] 50 acres but has no more than 60 houses. ... there is an abbey of which the ruins are almost all standing. ... There is a big uninhabited castle called Bermingham's Court.. In the middle of Athenry is the stump of a cross destroyed in the wars, on which a crucifix in bas-relief still remains. ... I noticed at the door of a tavern a large cake decorated with a bouquet. It was a prize for the best dancer. ... The road from Athenry is very beautiful and there are no barriers (turnpikes)

Moyode Castle is another tall 16th-century fortified tower house of the Dolphin family, which went to the Persse family. The castle is now restored and inhabited and is located 3.5 miles (5.6 km) from the town of Athenry.

By road, Athenry is served by the M6 Motorway which links Galway city to Dublin. By rail, it is served by Athenry railway station which opened on 1 August 1851 and lies on the Galway–Dublin main line of the Irish rail network. The town is at the junction the Galway–Dublin line, and the partially complete Limerick–Sligo line (dubbed the Western Railway Corridor). Work ('West on Track') is underway to re-open further links, with the Ennis-Athenry section open since March 2010, and the Athenry-Tuam section due in 2011, though not completed yet.

In 2015, Apple Inc. decided to build a €850m data center near Athenry, and a similar one in Viborg, Denmark.

Athenry is twinned with the town of Quimperlé in Brittany and, as of the 15th of August 2013, Renews-Cappahayden, Newfoundland and Labrador.

The following is a list of notable natives of Athenry:

All content from Kiddle encyclopedia articles (including the article images and facts) can be freely used under Attribution-ShareAlike license, unless stated otherwise. Cite this article:
Athenry Facts for Kids. Kiddle Encyclopedia.