In 1847, surveyors working for the U.S. government walked the six mile squares that would become the town of Westboro. They marked off the outline of the town on foot using compass and chain. A crew came back in 1858 to survey all the section lines. When done, the deputy surveyor filed a general description for each six-mile square. Of them, the description of west-central Westboro (T33N R1W) is clearest:

This Township contains a few Tamarac and Cedar Swamps of Small extent, most of them unfit for cultivation. The surface is a Rolling Soil first and Second rate. Timber chiefly Hemlock Birch, Maple, Pine, Tamarac and Cedar. There is a large Windfall runs across the North West corner bears in South West and North East Direction Timber Decayed and grown to second Growth Popler.

There is several creeks in this Township among which is the Yellow River runs in a North Westerly course across the South West corner of the Township. It is a deep and narrow Stream flows in a gentle current, not good for forming Motive Power for Mill. There is another Stream of considerable extent enters the Township near the South East corner and runs in a gentle current Northwesterly. It is a deep narrow Stream banks low and principally lined with Alder. 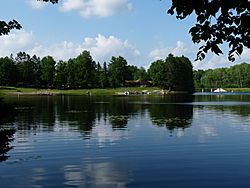 A different surveyor in 1862 was more enthusiastic about east-central Westboro, the six mile square where most of the population is today:

A large portion of this Township is valuable for its splendid White Pine, also for its good soil. The surface is rolling and Timber heavy.

When Taylor County was formed in 1875, Westboro was six miles north to south same as today, but it spanned the full width of the county, including all modern towns from McKinley to Rib Lake.

In 1933 much of the cut-over west half of the town of Westboro was designated part of the Chequamegon National Forest. Starting that year, a Civilian Conservation Corps camp at Mondeaux developed the Mondeaux Dam Recreation Area.

There were 261 households out of which 35.2% had children under the age of 18 living with them, 57.9% were married couples living together, 4.6% had a female householder with no husband present, and 31.4% were non-families. 26.4% of all households were made up of individuals and 12.3% had someone living alone who was 65 years of age or older. The average household size was 2.53 and the average family size was 3.08.

All content from Kiddle encyclopedia articles (including the article images and facts) can be freely used under Attribution-ShareAlike license, unless stated otherwise. Cite this article:
Westboro, Wisconsin Facts for Kids. Kiddle Encyclopedia.