The Western Union Building, formerly known as the Hagerty Block and currently as the Dacotah Prairie Museum, is a historic bank building in Aberdeen, South Dakota. It is individually listed on the National Register of Historic Places and is a contributing property to the Aberdeen Commercial Historic District. 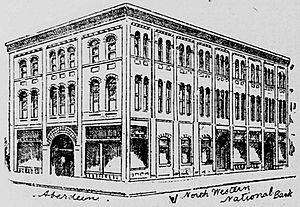 The Northwestern National Bank formed in Aberdeen in 1888 with Henry Marple as president. In August 1888, the bank purchased the property and general store at 21–23 South Main Street to build a new bank building. Construction took place from 1888 through 1889 with the bank opening in the new location in February 1889. In May 1891, a fire damaged the building and gutted the Kearney and Boyer grocery store. In March 1903, another fire damaged the building, originating in the basement banana room of the Gamble & Robinson grocery store.

The Western Union Building is an example of Romanesque Revival architecture. The structure is a three-story building made of red brick laid in running bond. There are three main entrances, each framed by a large arch and set a few steps above street level. Pilasters extend the full height of the building, separating windows on the first floor and window pairs on the second and third floors. The interior has undergone renovations, but the exterior has changed little over the building's history.

All content from Kiddle encyclopedia articles (including the article images and facts) can be freely used under Attribution-ShareAlike license, unless stated otherwise. Cite this article:
Western Union Building (Aberdeen, South Dakota) Facts for Kids. Kiddle Encyclopedia.