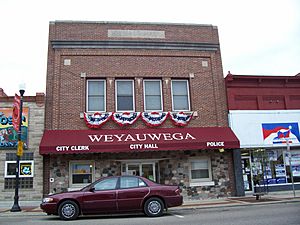 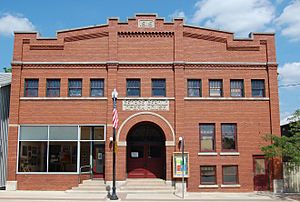 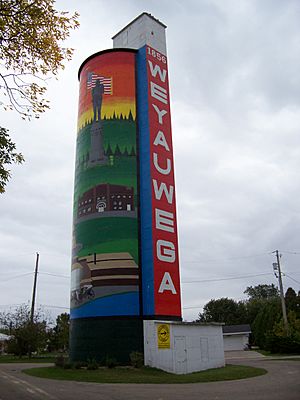 Weyauwega is a city in Waupaca County, Wisconsin, United States. The population was 1,900 at the 2010 census. The city is located mostly within the Town of Weyauwega, though it is politically independent of the town. Small portions extend north into the adjacent Town of Royalton. The city is commonly referred to as "Wega" by local residents. The name "Weyauwega" ( wy-ə-WEE-gə) means "Here we rest" because the town's origin was a stopping/resting point between two rivers when Native Americans had to portage their canoes. A fur trader built a small building at the location, from which the town later grew.

There were 746 households, of which 33.1% had children under the age of 18 living with them, 43.4% were married couples living together, 12.5% had a female householder with no husband present, 7.5% had a male householder with no wife present, and 36.6% were non-families. 29.8% of all households were made up of individuals, and 11.7% had someone living alone who was 65 years of age or older. The average household size was 2.43 and the average family size was 2.98.

Weyauwega is served by the Weyauwega-Fremont School District, which has an enrollment of about 963 students. The district has a high school, a middle school, and two elementary schools, one in Weyauwega and another in nearby Fremont, Wisconsin.

All content from Kiddle encyclopedia articles (including the article images and facts) can be freely used under Attribution-ShareAlike license, unless stated otherwise. Cite this article:
Weyauwega, Wisconsin Facts for Kids. Kiddle Encyclopedia.