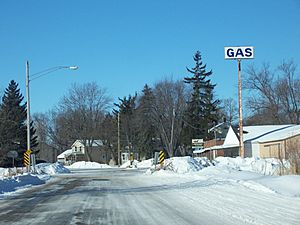 Fremont, east of the Wolf River 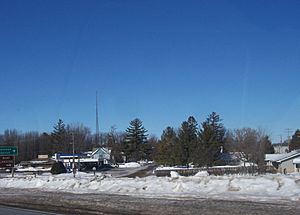 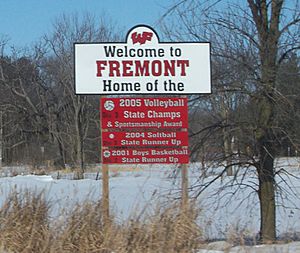 Fremont is a village in Waupaca County, Wisconsin, United States. It is surrounded by Town of Fremont. The population was 679 at the 2010 census. Fremont has been referred to as the "White Bass Capital of the World."

The Town of Fremont was first settled in the spring of 1849 by D. Gordon. The first paper published was the Fremont Pioneer in 1857. The first church (Presbyterian) was built in 1873. The village of Fremont was organized in 1888.

The story of the "Death of Wau-Ke-John", a war chief of the Menominee, takes place in the summer of 1852 as reported by W. A. Springer "who was in the neighborhood ... and was present at the funeral".

The Wolf River flows through the middle of the village, with Partridge Lake just upriver. A spawning run of white bass, or sand bass (Morone chrysops), also known as "stripers", occurs twice a year - in May around Mother's Day and in late September to early October. Lake sturgeon from Lake Winnebago travel upriver to the Fremont area in spring to spawn. Fremont is known as "the white bass capital of the world".

There were 305 households, of which 27.2% had children under the age of 18 living with them, 52.1% were married couples living together, 7.9% had a female householder with no husband present, 5.6% had a male householder with no wife present, and 34.4% were non-families. 29.2% of all households were made up of individuals, and 16.4% had someone living alone who was 65 years of age or older. The average household size was 2.23 and the average family size was 2.72.

The Fremont Elementary School, which serves grades PreK-5, on 4.1 acres (17,000 m2) immediately east of the U.S. Post Office, is part of the Weyauwega-Fremont School District.

St. John’s Lutheran School is a Christian school of the Wisconsin Evangelical Lutheran Synod in Fremont.

All content from Kiddle encyclopedia articles (including the article images and facts) can be freely used under Attribution-ShareAlike license, unless stated otherwise. Cite this article:
Fremont, Wisconsin Facts for Kids. Kiddle Encyclopedia.