The White-lipped Tree Frog (Litoria infrafrenata) or the Giant Tree Frog is a species of tree frogs. They are the largest tree frog in the world. They are native to Northern Queensland, New Guinea, the Bismarck Islands and the Admiralty Islands. They are related to the White's Tree Frog. The Giant Tree Frogs eats insects and arthropods. They can live up to 10 years in the wild. In Australia, they can be kept as pets. Australians must have a license to have them. 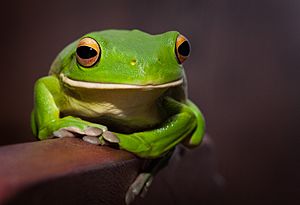 The white-lipped tree frog reaches 11–14 cm (4.3–5.5 in) in length. Females are larger than males. Its dorsal surface is usually bright green, although the colour changes depending on the temperature and background, and can be brown. The ventral surface is off-white. The lower lip has a distinctive white stripe (giving this species its name), which continues to the shoulder. The white stripes on the trailing edges of the lower leg may turn pink in the breeding male. The white-lipped tree frog has large toe pads, which aid it to climb. The toes are completely webbed, and the hands are partially webbed. 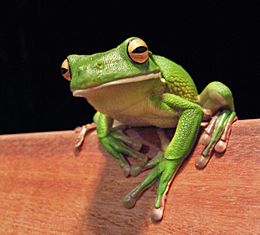 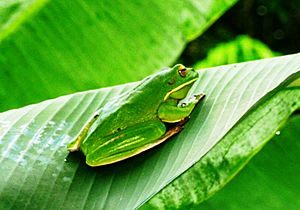 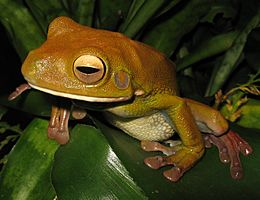 The white-lipped tree frog is distributed in Australia along the coastal areas of Cape York Peninsula and the wet tropics of north-eastern Queensland. It is the most widely distributed tree frog in the New Guinea region, spanning from eastern Indonesia, through the New Guinea mainland, to the Bismarck and the Admiralty Islands in the north. It lives in rainforests, cultivated areas, and around houses in coastal areas, and is restricted to areas below 1200 m in altitude.

It has a loud, barking call, but when distressed, it makes a cat-like "mew" sound or may discharge urine. Males call during spring and summer after rain from vegetation around the breeding site, normally a still body of water.

Its diet is mainly insects and other arthropods. It can live to over 10 years in the wild.

This species of frog is known for being moved around in fruit produce from northern Australia and ending up becoming a lost frog in southern areas.

It is kept as a pet; but in Australia, it may be kept in captivity only with an appropriate permit.

All content from Kiddle encyclopedia articles (including the article images and facts) can be freely used under Attribution-ShareAlike license, unless stated otherwise. Cite this article:
Giant Tree Frog Facts for Kids. Kiddle Encyclopedia.