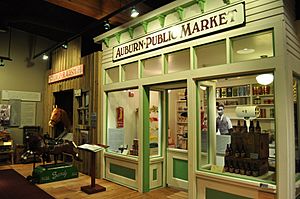 Examples of the museum's temporary exhibits include "On Track": a collection of railroad photographs of Warren McGee taken between the 1930s and 1970s, and a collection of Auburn "Our Story" Videos covering a variety of regional historical topics.

The White River Valley Museum's collections include the historic site Mary Olson's Farm, as well as an archive of the monthly museum publication "White River Journal". The museum's photograph collection contains thousands of regional historic images dating between 1894 and 1982, while the museum's small research library holds books, diaries and regional newspapers from the same period. The museum also has an extensive collection of regional artifacts from both historic Auburn and its people, as well as objects from regional Native American tribes, including the Salish and Muckleshoot.

All content from Kiddle encyclopedia articles (including the article images and facts) can be freely used under Attribution-ShareAlike license, unless stated otherwise. Cite this article:
White River Valley Museum Facts for Kids. Kiddle Encyclopedia.