Who Said facts for kids

"Who Said" is a song by American recording artist and actress Miley Cyrus. She is performing as Hannah Montana – the alter ego of Miley Stewart, a character she plays on the Disney Channel television series Hannah Montana. The song was written by Matthew Gerrard, Robbie Nevil, and Jay Landers and produced by Gerrard. It was released on July 11, 2006 by Walt Disney Records as a promotional single from the series' first soundtrack, Hannah Montana. "Who Said" bears teen pop aspects musically, while its lyrics are about individualism.

"Who Said" was composed by Matthew Gerrard with the aid of Robbie Nevil and Jay Landers. Gerrard co-wrote a total of six songs on Hannah Montana while Nevil co-wrote four and Landers two. A karaoke version appears on Disney's Karaoke Series: Hannah Montana (2007), while a remixed version appears on Hits Remixed (2008). The song first premiered on Radio Disney on March 10, 2006 in order to promote the series and was afterward released as a promotional single from Hannah Montana on July 11, 2006 to digital retailers. The album artwork for the release was the same as the soundtrack's.

"Who Said" is pop rock song with a length of three minutes and fifteen seconds. The song incorporates various teen pop styles within its music, according to AllMusic. The song is set in common time and has a moderate tempo of 120 beats per minute. It is written in the key of E major and Cyrus' vocals span two octaves, from B3 to C♯5. "Who Said" follows the chord progression of E–A. Chris William of Entertainment Weekly perceived the lyrics of "Who Said" pertained to individualism, noting the lines "I'm individual / I'm not like anyone".

As it was not released as a single, "Who Said" received exclusive airplay on Radio Disney, thus its chart appearances consisted mainly of digital downloads. On the week ending August 5, 2006, the song debuted at number ninety-two on the Billboard Hot 100; succeeding the appearance, the song dropped from the chart. Following the release of the Hannah Montana soundtrack, the song entered Billboard's Hot Digital Songs Chart at number forty-four, which led to a reappearance on the Billboard Hot 100 on the week ending November 11, 2006. "Who Said" re-entered the Billboard Hot 100 at its peak of eighty-three, thus becoming one of the songs to make Cyrus the female act with the most songs charting in the same week. The record was later duplicated by Taylor Swift. The song also peaked at number sixty-three on the now-defunct Pop 100 Chart. "Who Said" peaked at number sixty-five on the Hot Canadian Digital Singles chart. 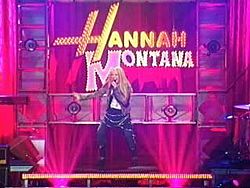 Cyrus as Montana performs in the concert taping for the first season of Hannah Montana; it is used as the music video for "Who Said".

Cyrus, costumed as Montana, first performed "Who Said", along with six other songs, at the concert taping for the first season of Hannah Montana. In the performance, Cyrus dressed in a white tank top embroidered with a rhinestone cross, blue jeans with a loose, black miniskirt on top of it, black leather boots, and silver leather jacket. It began with Cyrus entering from behind a huge, illuminated sign that spelled "Hannah Montana". She then roamed throughout the stage singing the number. The performance was later released as the song's music video on April 10, 2006 on Disney Channel. Cyrus also performed the song on twenty dates in the fall of 2006, when she opened for the Cheetah Girls' 2006 and 2007 concert tour The Party's Just Begun Tour.

All content from Kiddle encyclopedia articles (including the article images and facts) can be freely used under Attribution-ShareAlike license, unless stated otherwise. Cite this article:
Who Said Facts for Kids. Kiddle Encyclopedia.