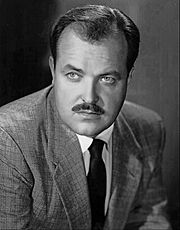 Conrad was born on September 27, 1920 in Louisville, Kentucky. He was married to June Nelson from 1943 until her death in 1977. Then he was married to Tippy Stringer Huntly from 1980 until his death in 1994. He had a son, Christopher by his wife June. Conrad died on February 11, 1994 in Los Angeles, California from heart failure, aged 73.

All content from Kiddle encyclopedia articles (including the article images and facts) can be freely used under Attribution-ShareAlike license, unless stated otherwise. Cite this article:
William Conrad Facts for Kids. Kiddle Encyclopedia.