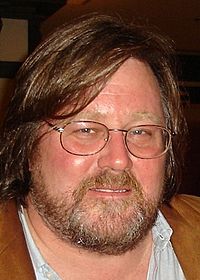 William J. Monahan (born November 3, 1960) is an American screenwriter, movie director and author. He wrote the satirical novel Light House: A Trifle (2000). He then went on to write screenplays. Some of his these include Kingdom of Heaven (2005), The Departed (2005), Body of Lies (2008), Edge of Darkness (2010) and The Gambler (2014). The Departed won him a Writers Guild of America Award and Academy Award for Best Adapted Screenplay. He also wrote and directed London Boulevard (2010) and Mojave (2015). He has also written for magazine Maxim.

Monahan was born in the Dorchester neighborhood of Boston, Massachusetts.

All content from Kiddle encyclopedia articles (including the article images and facts) can be freely used under Attribution-ShareAlike license, unless stated otherwise. Cite this article:
William Monahan Facts for Kids. Kiddle Encyclopedia.