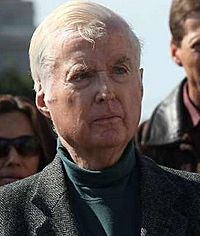 William Alfred Newsom III (February 15, 1934 – December 12, 2018) was an American politician and lawyer. He was born in San Francisco, California. He was an administrator of the Getty family trust. He was the father of California governor Gavin Newsom.

In 1975, Jerry Brown appointed Newsom to the Superior Court bench in Auburn (Placer County) and later to the state Court of Appeal in San Francisco, where he was until 1995.

All content from Kiddle encyclopedia articles (including the article images and facts) can be freely used under Attribution-ShareAlike license, unless stated otherwise. Cite this article:
William Newsom Facts for Kids. Kiddle Encyclopedia.